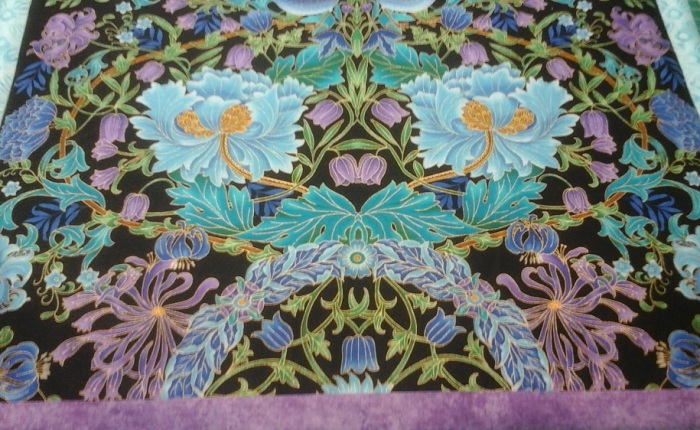 When I sit at my computer in the evening, the glorious sun shares it’s wealth of color and heat – right on top of my head. I think I can enjoy it, but after about 6 minutes, I feel like I am on fire, and it takes me about 30 minutes to cool down and feel right again. Last year, I am ashamed to say that I hung a towel over the lace curtain. It doesn’t cover the whole window, just the part where the sun heats up my head.
Last Christmas, on the Eve, in fact, my monitor died. At 4 pm. I remember this because I thought “I have 2 hours before the stores close” and ran out and bought a 32″ flat screen TV to hook up to my computer. It worked, but the other window behind me glared onto it, so that I had to hang a sheet over that lace curtain.
So now what we have is a trashy looking office, which simply won’t do for a person of my taste and creativity.
Enter Timeless Treasures Suffolk panel! 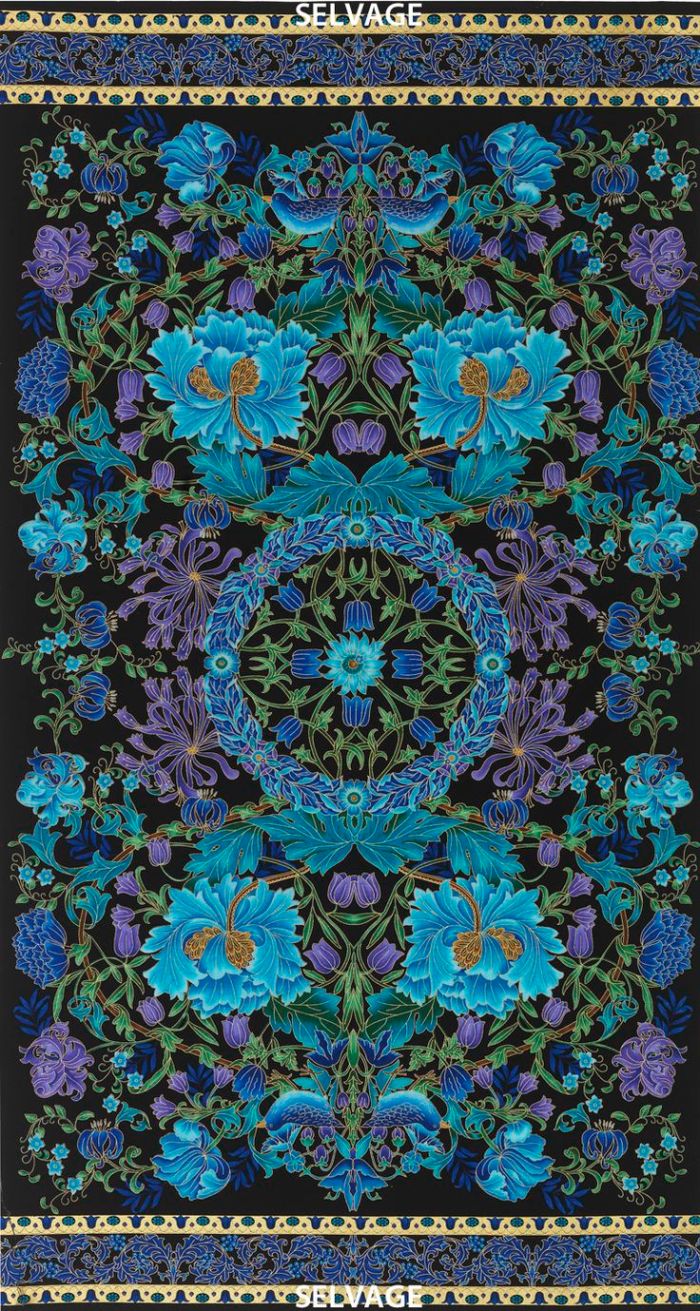 I decided to get two of these and cut them in half. I am not a fan of black backgrounds on fabric, so I will add some more color to lighten it up. I added a wide strip of sky blue batik, and a narrow strip of lavender to build it out to the dimensions I require.
When I use quilters cotton for curtains, I place a layer of thick white felt behind it, because the sun will shine through it, and wash out the colors. Now, if these were going to be “black out” curtains, I would add a layer of black felt instead, but I actually want a bit of sunlight to show through.
Once I have these two layers done, I move on to the batting, and backing.

Experience has shown that no matter what color you use on the back, it will fade to nearly white, so now I just use Kona white.
It so happened that I needed more Kona white to finish the second of the “Twin” quilts, so I bought extra.
While cutting the back of the panels, I used the selvage for the edge of the liner of the cut out and had some extra in between, so I cut strips for the quilt. If I didn’t have the selvage, I’d have to hem it – only as a fray check because it doesn’t show.

Don’t forget to notch it. 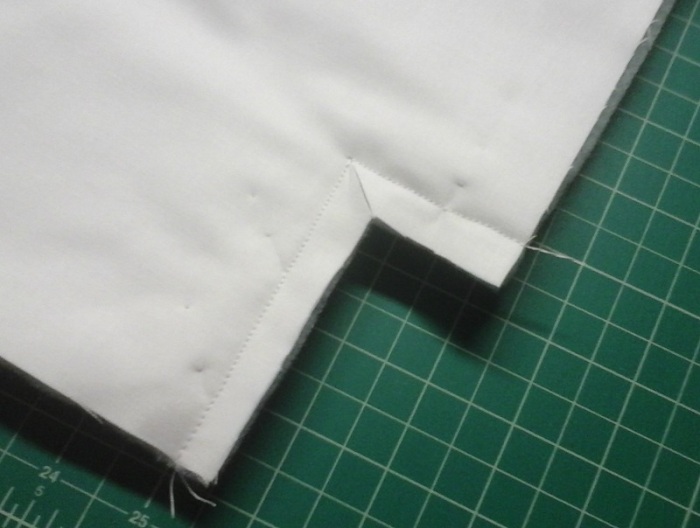 The cutout is turned out and top stitched.

A scrap is added on top of the cutout to finish the edges when it is sewn together.

Before sewing all the layers together, you want to sew  the batting to the backing [about 6 inches] where you will leave it open to turn it out. You be glad you did when you go to hand sew it closed.

After it is sewn and turned right sides out,  I usually stitch right at bottom of the cutout, but that stitch placement didn’t look good on the front.

I use number 4 thick poly batting for the middle, and I quilt it according to what looks good on the front – not what the manufacturor says.

I did not quilt these more because every stitch that has the sun behind it will show as points of light. You can see a bit of that in the Bedroom Curtains I made. If the curtain was bigger, I could have quilted the batting to the backing before sewing the front on to avoid the light comming through the stitches. These are small, and I will hand or gentle cycle wash them. 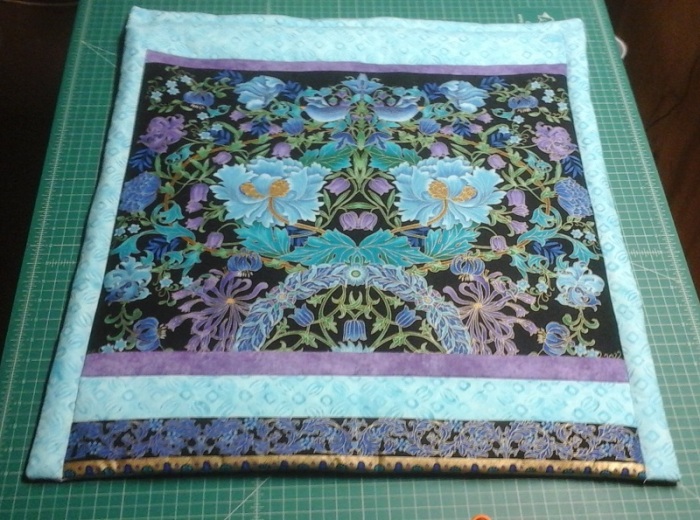 Now when I go in the office, I am greeted by the amazing glow of big beautiful flowers. 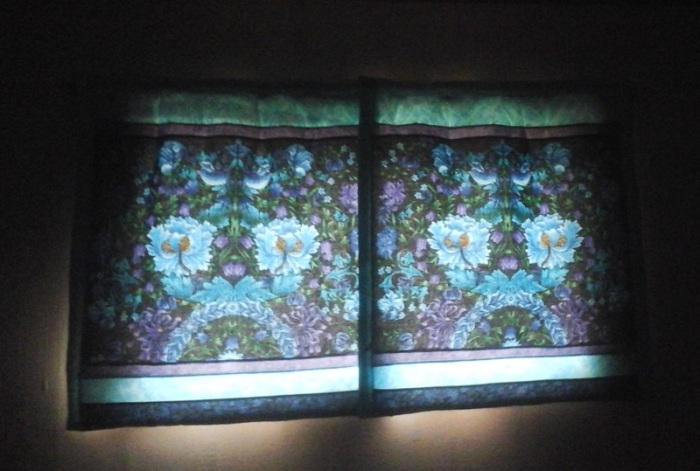 Good bye Hot head! Now I can get back to quilting. 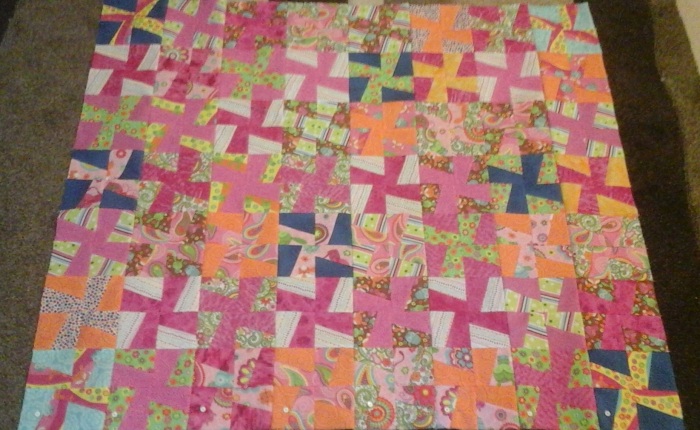 Ugly Jelly makes a baby!
This was an easy quilt, and fun to make.
I was asked by Brat to make, and I quote “a quilt” for another Navy friend. The thing is, this friend had twins! Great! So, I had to figure on making two quilts, both alike, yet different. My first thought was to make same quilt, but add a different element of color. Of course that is the easiest, so I chose a design I had recently made to use precuts. I bought the fabric:  one layer cake, and Kona’s color of the year for sashing, and thought “easy peasy” while waiting for my squishy to arrive. When I got ready to make it, I noticed Kona’s Flamingo Pink didn’t quite match the large floral prints of the layer cake that I wanted to use. Back burner!
So it sat a bit until I got this idea from a book to make pinwheels out of a strip set. I have over 50 jelly rolls, and still have some of those ugly ones that I made my first Ugly Jelly Quilt from in other colorways. Time to use them up! Thank goodness they only came in sets of 20 strips. I grabbed 3 rolls knowing I would pull out some of the more hideous ones.

Warning: The following image may not be suitable for sewists of fine taste. 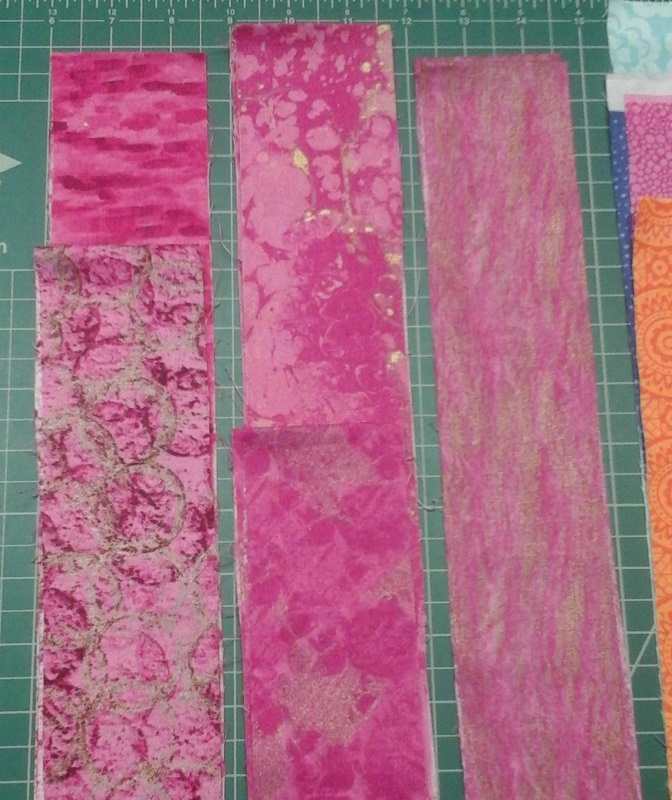 I had some templates cut for me at the local hardware store years ago to use for fussy cutting, so I found my 3.5″ one, and drew a line 1 1/8th inch from the top across to 1 1/8th from the bottom on the other side, and made a test strip. I cut it, assembled it, and liked it. I later added little feet to the template so it would float over the seam, and not move while I cut them. 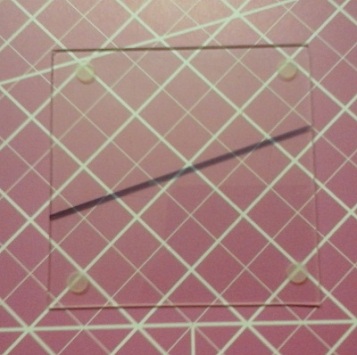 Each strip set will cut into 11 pieces, but you only need  8 pieces to make 2 blocks. 3 more pieces is not enough for another block. I will worry about those left overs later.

The drawn line shows up better if it is on the ‘down’ side. Simply line up with the seam, and cut. 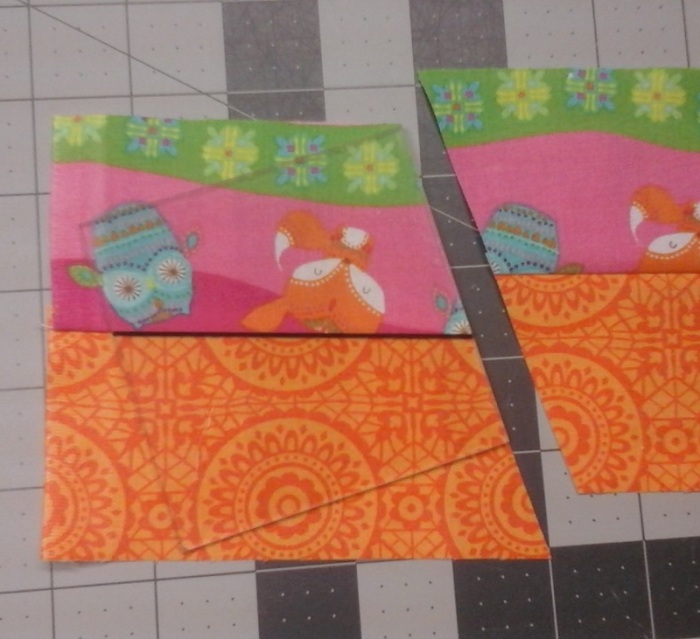 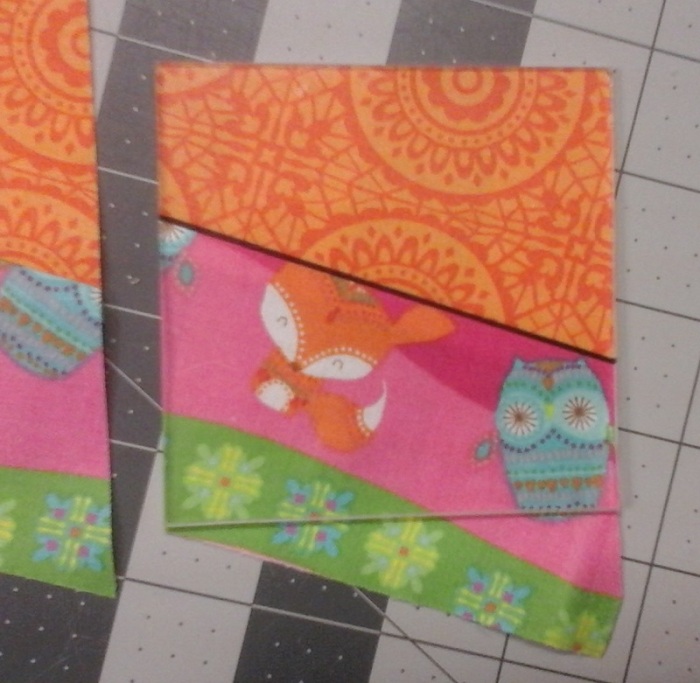 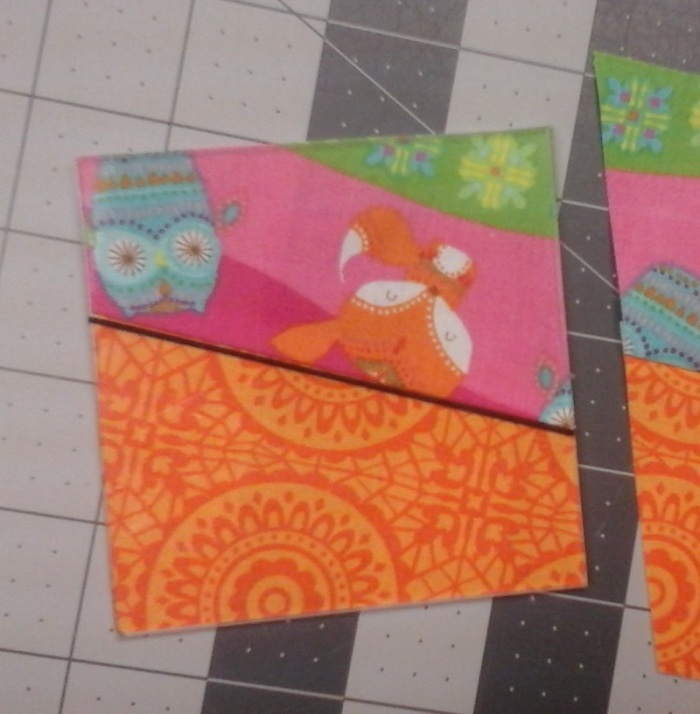 2 stacks of 4 pieces, and here’s the leftovers. If I was doing a 2 color quilt, I could use these better, but I’m not.

These blocks can be arranged either way.

Once I removed the more hideous ones, I replaced them with some pink strips cut from Timeless Treasures. 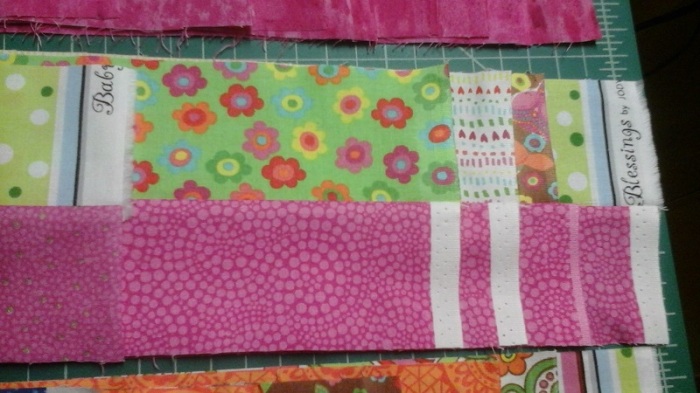 I will never buy a roll of strips from this company again. I still have 6 more reminders of this mistake.

After all the strip sets were sewn, I set up an assembly line in front of the TV, and cut the whole thing while watching one single movie! The 3.5 template set on my small rotating cutting board enabled me to spin and cut on all 4 sides without moving the template.

Yes, that’s a sandwich baggie taped to the side of the table. 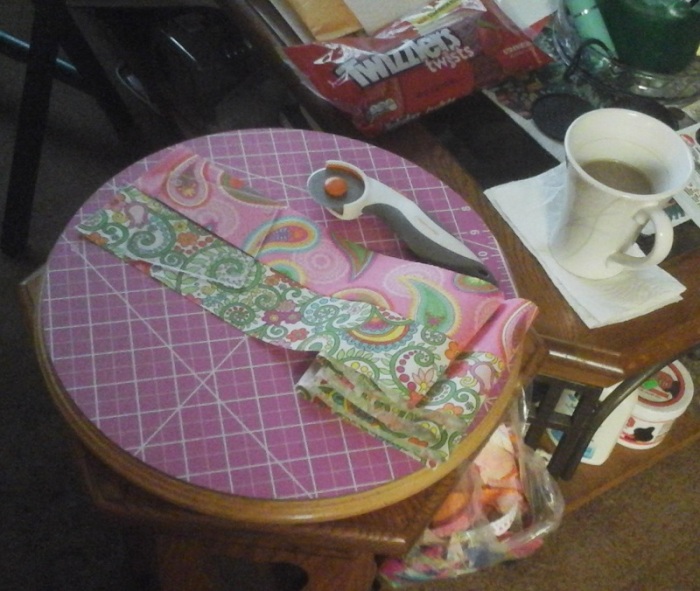 Meanwhile my Sew Sampler box [by Fat Quarter Shop] had arrived on the same day as my new wooden wall paper roller. The SS box contained a seam roller tool by clover, so I tried both. I wanted to like the wood one that was only $8, and I might have, if not for how nice the clover one fits in my hand, plus is exactly as wide as the seam. It retails for about $14. Again, I never would have bought this, but since it came in my box, I am really diggin it! In fact I went to a newly formed Featherweight group a couple of towns away, and showed them what I was working on, and a lady there was so impressed with the tool, that she bought one on her phone while I was there. The other ladies were fascinated [after I explained what a Sew Sampler box was] that I get Christmas  delivered to me once a month!

Then I made an assembly line sewing station. I lined them up, and ran through 4 sets of 2 at first, then took the first two off the chain, pressed them with the seam roller, placed them together, and ran them through, completing one block.

Then 2 more sets of two, cut two more off the chain, put completed block asside, rolled the seams, place together, and run them under the needle.

Every 3rd piece in the chain was a completed block until they were all done.

It took longer to arrange them on my “quilt wall” than it did to sew them.
The whole thing was done in a weekend.

1. When making the blocks, because the colors all meet in the center, you don’t have to focus on matching the seems so much. Instead, focus on  matching the edges of the fabric, and you won’t have to trim or square up these blocks before sewing them together.

2. When sewing the blocks into rows, I did not press the seams until they were all sewn. That way, I could press one row’s seams to the east, and the next row’s seams to the west, so they all nested. Yes, I press to one side so I can [say it with me] stitch in the ditch.

3. I have a set of numbered pins, that I used on the first block in each row, because order is sew important on a scrappy quilt like this! It takes a lot of work to make stuff look random. [the tiny white circles in quilt below are the numbered pins]

Now I must mull over how to make another quilt out of the scraps! Ugly scraps. Ugh! 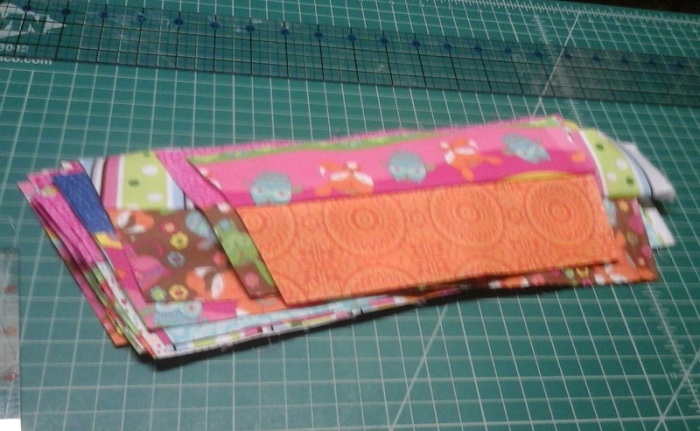 Stay tuned. It gets prettier! I promise.

The other Twin quilt is done, so here is the rest of the pictures.

I didn’t add the border until I got the second one done, so they’d be the same size.

The pinwheel was quilted with straight lines in the ditch outlining the pinwheels. Then I read the quilt spacing specs for the batting I was using [2 to 4 inches – who DOES that?]. 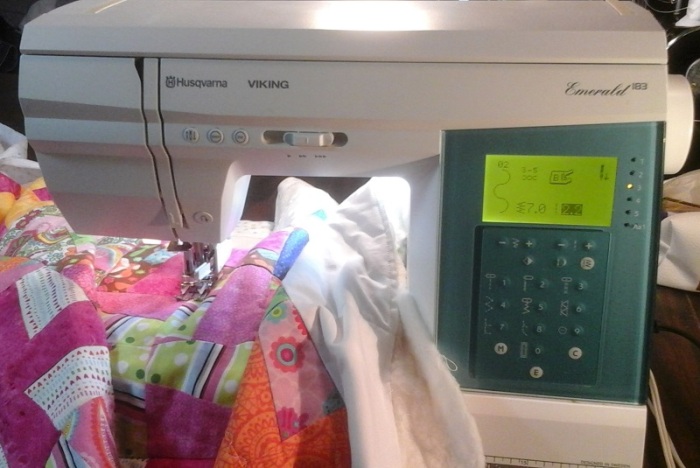 After kicking myself, I had Emmy Lou do her serpentine stitch through the middle of each one.

Ooops! I forgot I had light blue thread in Emmy’s bobbin. 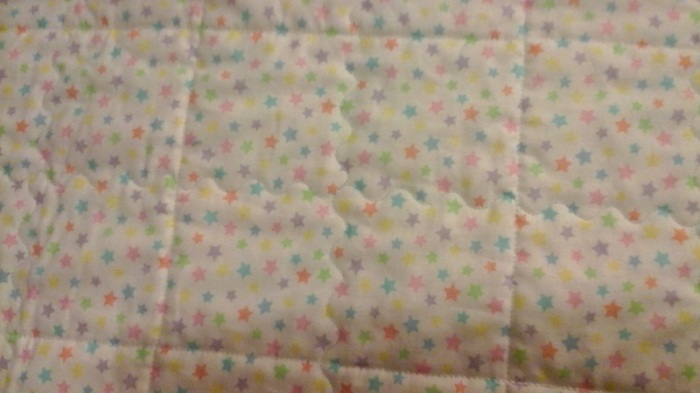